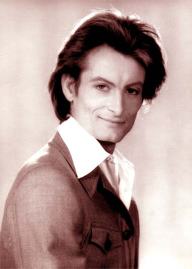 adore and revere him.  Fluent in English, Polish, Russian, French (and Italian?), a graduate of the Vaganova Academy, dancer with Béjart , and an enthusiastic connoisseur of all kinds of culture from opera to The Golden Girls, he was intelligent, kind, funny, learned, sensitive – you name it, he had it. Like many central Europeans I’ve known, he had an integrity and honour that saw straight through pretension and dishonesty, and respected talent and hard work. I didn’t realise at the time that the world wasn’t full of Woyteks – I thought every ballet company had one. It was only when he died, far too young, in 1995, that I realised how fortunate I had been to work with him so closely.

God only knows what he would make of the dance teaching world now, preoccupied as it is with health & safety, certification, litigation and Pilates rather than those old fashioned things, music, dance and sister arts. I didn’t realise for years that he would get up every morning at 7.30 to write out his class in full in a notebook, and I didn’t realise for years after that this was rather unusual.

Meeting Woytek Lowski for the first time in class

It was an extraordinary first meeting – I was freelancing at ENB school, and the schedule had no time for introductions, so we just got on with the class. With the best and most musical teachers, class becomes a kind of conversation without words between teacher and accompanist; so it was with Woytek. We got to know each other through musical sign-language, so that when – much later – we actually had a chance to exchange words with each other, there were all kinds of things we were bursting to say.

Woytek was committed to hard work and not wasting time, and he could sometimes be quite dark, silent & serious, but nevertheless, more than anything else, he taught me the value of humour in class. Really hard work needs good humour and motivation, and tragedy is most effective when offset by comic relief. In other words, when exercises are strenuous, the last thing you want is strain in the music. If you want to make people responsive to quiet, pensive music, then make them laugh first. He also came up with the pithiest summary of what class music needs to be about – “When the exercise is simple, you can have difficult music. When it is hard, you need simple music”. It meant a lot to me to have the opportunity to credit Woytek with this in the introduction to the RAD’s A Dance Class Anthology

Repertoire
I owe countless bits of repertoire to Woytek; it was he, for example, who introduced me to Shostakovich’s music for Panov’s The Idiot. I didn’t realise – until he fell about laughing when I played it – that the Russian folksong Stenka Razin is what you hear drunks singing at chucking-time. His love of Brel, Piaf, Dietrich and others encouraged me to expand my repertoire of chansons, and for Woytek I grudgingly listened to some opera and grudgingly admitted that some of it was quite nice.

Working with him also helped me to ‘read’ exercises. With Woytek, the onus was on the pianist to assess the musical needs/qualities of the exercise, and on the dancer to adapt the dynamics & articulation of the exercise to whatever music came out of the piano. It wasn’t musical laziness or ignorance on his part – far from it, he could have set the whole class 10 times over on different music if he had wanted. It was, on the contrary, part of how he saw the role of the dancer in class – not as a passive recipient of prefabricated routines, but as an interpreter of material. On occasions it would drive some dancers nuts – but it always made sense in the end.

He taught me a lot about playing for boys’ classes (as attuned as I am to current trends in ballet-world political correctness, I still can’t bring myself to call them ‘men’s’ classes). For his book, The Art of Teaching Classical Ballet we devised and recorded a tape which went with the sample class, and this exemplified many of the things that Woytek wanted class music to be. But we also sat in an Italian restaurant in Balham one night and devised two other classes of music, one for boys, one for pointe, which we never came to record. The boys’ one was full of typical Woytek humour – music to make you feel masculine, princely and macho one moment, and then music to make you get-over-yourself in case you should take it all a bit too seriously. We dreaded boys’ classes at ENB, because we both knew just how moody a studio full of male dancers can be in the morning – and the straight ones are the worst. It would always work in the end, because we made it work, but the effort needed was always at least double what it takes for a girls’ class.

Which brings me to one of my favourite Woytek stories. For a few weeks in the early 1990s, ENB seemed to have completely run out of plastic spoons, or else someone had ordered 10,000 sporks by accident. One morning, Woytek & I were standing in the kitchen area, waiting while another teacher made themselves a cup of coffee. She cursed as – like a hundred people before her – she took the spork out of the instant coffee jar, and watched as the granules dropped through the bloody spork back into the coffee jar. “This”, said Woytek, laughing and pointing at the offending spork, “is like teaching boys’ class!”.

This is part of my dance inspirations advent calendar