The front page of my site shows brief excerpts of longer posts—click on the title to read the full post. I've had numerous annoying glitches with WordPress templates, so I'd be really grateful to know of anything that doesn't work or looks odd.

I am the first person to celebrate the wonderfulness of the web, and the fact that you can buy almost anything from anywhere at the touch of a button, but I wonder sometimes if shopping in the real world is suffering as a result.

Way back in 1997, Chris Hampson and I wondered where old ladies buy rain-mates (scroll down the page to find the answer), and now Daniel Jones and I have a similar problem with the Kazoo. You can forgive the wonderful Macari’s in Charing Cross Road for being fresh out of them, because a) they sell everything else including three types of theremin [cherubim, seraphim and theremin?], b) their shop is as much fun as their website, and c) one of the guys behind the counter is in the Return of the Jingleberries. Likewise, Foote’s in Golden Square get my vote for having an Acme Siren Whistle in stock, and the two guys in the percussion department have an endearingly postmodern attitude to music and salesmanship which worked a treat on me (who else would ask you if you’re sure you wouldn’t like a duck-warbler to go with that siren whistle?).

Harrods: No Kazoos There 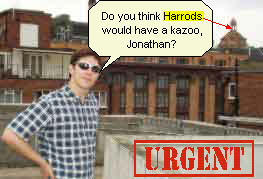 But what do you make of the fact that you can’t get a kazoo in the whole of Denmark Street, where po-faced guitar-snobs tell you you need to go to Chalk Farm for ‘that comedy stuff’? Or that Harrods, once famous for stocking everything you could ever want, not only don’t sell them (in music or toys), but can’t tell you where to get one either?

Hunting the shoppoleth
Hence, I’m coining the word ‘shoppoleth‘, (from shop and shibboleth), meaning any item whose disappearance from your local shop signifies the rise of the virtual world at the expense of the real one. Likewise, if you can buy a shoppoleth near you, it signifies that everything is all right with the world for a bit. An extreme example would be the cobbler’s last that I saw in Woolworths (of all places) in Berlin in 1993. If you can buy a last at your local shop, rejoice.

Kazoo Watch
Meanwhile, if you live in the UK and your local shop sells kazoos, please add their name to the roll of honour (comments) below. Likewise, any more sites like Miserable Melodies which features such things as the Temple City Kazoo Orchestra playing Whole Lotta Love are welcomed.

A year of ballet playing cards #6 (S6): A barcarole for port de bras

One thought on “Theremins and Shoppoleths”

A year of ballet playing cards #6 (S6): A barcarole for port de bras

Me in conversation on a podcast

Music, time and politics in the ballet studio